The Evolution of Woodworking

Home / News / The Evolution of Woodworking

Humans have been building with wood for the entirety of our existence. Analysis of stone tools used by the Neanderthals in Europe shows they were used to work timber as far back as 160,000 years ago. Along with mud and stone, timber is one of humanity’s earliest building materials, and it has been used to create everything from tools, hunting equipment and transport to housing and furniture. Despite humble beginnings with tools made of stone and flint, woodworking has persisted throughout all of history, eventually becoming the sophisticated, modern industry we know today. But, to really appreciate the convenience of modern power tools and machinery, it’s worth looking back through history to see the evolution of woodworking.

While some of the earliest traces of woodworking have been tied to the Neanderthals, most of their creations were simple worked pieces of wood. Tools made of stone and flint were used to carve sticks and shape spears for hunting. Humans made steady progress from there. Archaeological findings from China and Egypt show they were using sophisticated woodworking tools to create housing and furniture, some of which is still preserved today. Ancient Egyptians mostly used copper hand tools, such as axes, chisels, saws and bow drills, although bronze tools took over after about 2000 BC. Despite their simple tools, Ancient Egyptians are also credited for developing woodworking techniques that still persist, like mortise and tenoning, wooden pegs and dowels, and using glues to strengthen joints.

Woodworking in the 17th and 18th Century

Wood continued to be an important building material for thousands of years. Although many Eastern countries developed iron tools much sooner, Europeans only began to use this newer, tougher metal around 500 BC. From there, steady progress was made. Tools improved and woodworkers honed their techniques until they became very proficient at producing sturdy structures and intricate designs using hand tools.

The next major evolution took place during the 17th and 18th centuries when metalworkers refined the steelmaking process. With access to better steel, woodworking tools took a major leap forward, with saws, chisels and boring tools all becoming tougher and more effective. The steel hand saw in particular allowed woodworkers to process larger amounts of timber with greater accuracy, leading to better and more refined products.

Woodworking in the Industrial Revolution

18th-century woodworking advances were one of the major precursors to the Industrial Revolution that followed. Finally able to work materials with greater accuracy, woodworkers contributed significantly to our ability to mechanise the world. Along with previous advances to saw blades, the Industrial Revolution saw the rise in other cutting and boring tools, like bench planes and augers. These were able to shape timber with great ease, leading to even more sophisticated techniques and products.

Finally, the first powered tools came into existence when steam engines were used to bring woodworking factories to life. These machines were simple at their core, with each factory having a large engine and a central driveshaft that was used to power all of their equipment with leather belt drives.

The Evolution of Woodworking Tools

From crude stone tools to the Bronze Age and into the modern era, woodworking equipment has come a long way. Timber continues to be one of the world’s most versatile and renewable building materials, and the woodworking industry has evolved to keep pace. Many of our modern machines are remarkably similar to their predecessors. The industry still makes heavy use of saws, drills, planes and lathes, although our equipment is now powered by electric motors, sophisticated computers and tough tool steels and carbides. We owe many modern conveniences to advances in the woodworking industry. Things like affordable furniture and houses would never have been possible without industrial timber manufacturing.

Industrial machinery has been powering the timber industry for more than a century now. Modern advancements in woodworking technologies have made things like quality furniture and timber more accessible than ever. Stirling Machinery proudly supports that effort, supplying world-class timber manufacturing solutions that help businesses unlock their production potential. Speak to us about our range of equipment today and let our team tailor a solution that can help your business meet its production goals and power the future. When it comes to detail and finishing work on timber components, sanders are a simple […] The timber manufacturing industry continues to advance at a rapid pace. New technologies and equipment […] 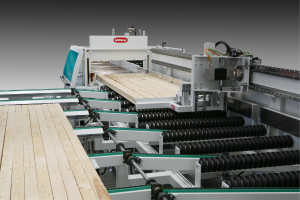 Modern timber workshops move faster than ever before. Keeping up with customer demands becomes much […]

Hear from our customers “Every step of the way, Stirling showed that they could partner with us in a meaningful way. We weren’t looking for a quick set-and-forget arrangement. We wanted a genuine collaboration that would see us through from consultancy and installation to operation and beyond.” “Stirling Machinery’s Planer Sander replaced the two existing sanders we had onsite. Finishing tabletops, a process that originally took two to three hours across two machines, has now been reduced to a matter of minutes in a one-pass finish. The team took the time to understand my operation, how it is run,and what we were looking for in terms of increased capacity and timber finish, and came back with a tailored solution that ticked all of the boxes.As a furniture maker of 35 years, I have been very impressed by the level of service,support and results Stirling has provided. From adding one machine, we have gained time, quality, space, output and efficiency and I couldn’t be happier.”

“What Craig and the rest of the team at Stirling care about is that the timber industry in Australia goes to a higher quality level. They want to see our customers getting the best product, they don’t just want to sell something. Craig is always asking the questions to make sure that whatever he sells me is going to make my product higher quality and the customer happier.”

Delivering complete solutions for the solid timber and flat panel industries across Australia and New Zealand.

Comprehensive tooling range sourced from the best manufacturers around the world.

Stay up to date on all the latest news, product information and training videos.
Subscribe